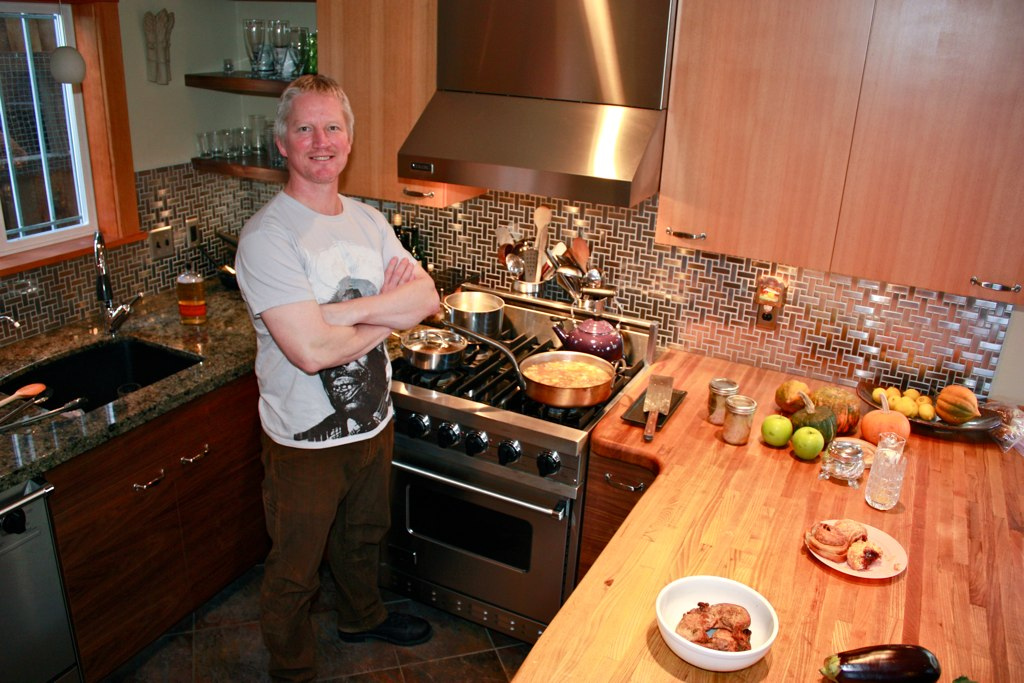 A few months ago, I thought it would be cool to start a series of posts called "Chef's at Home" which would feature Culinary Instructors in their home kitchens talking about what inspires them and what they love about cooking at home.  I started out with Chef Wilke.  Wilke founded OCI, the cooking school where I've worked now for over four years.  I'd met him over 10 years ago at another culinary school in town and he's constantly amazed me with his Rock Star attitude and how he exudes passion and confidence in the kitchens at school.


Chef Wilke's wife Jill greeted me warmly at the door when I first arrived to take photos. She pushed an antique, thrifted cup of French pressed coffee with cream into my cold hands as she led me into the golden glow of the kitchen. The fragrance of onions sautéed in butter and warm croissants from a local bakery infused my senses and the chill of the damp, grey Portland weather vanished behind me as the door closed. 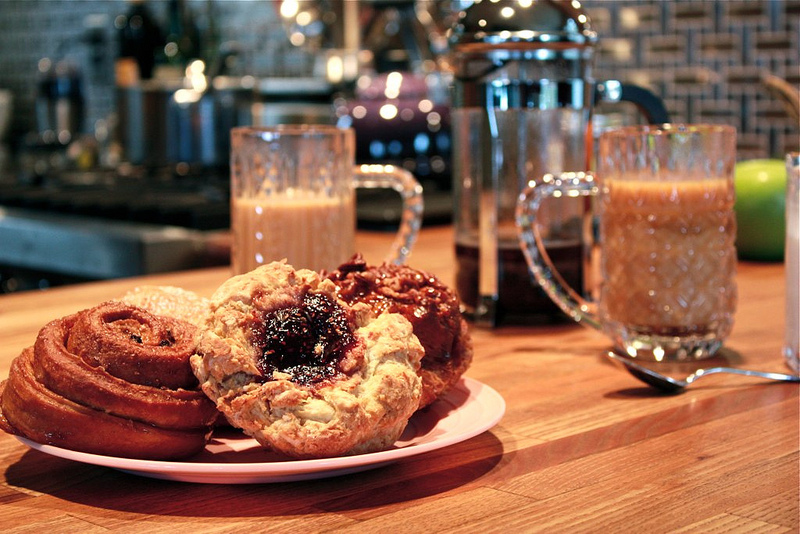 Chef Brian Wilke is the co-founder of a small, locally-owned culinary school nestled in the heart of the Goose Hollow neighborhood in downtown Portland Oregon. He's been teaching and cooking for over 30 years, and has influenced and mentored an enormous number of young cooks who make up the thriving restaurant scene in Portland. He values local, independently-owned businesses and restaurants and is a part of the pulse that makes the food scene in Portland such a Mecca of unique cooking styles and people. 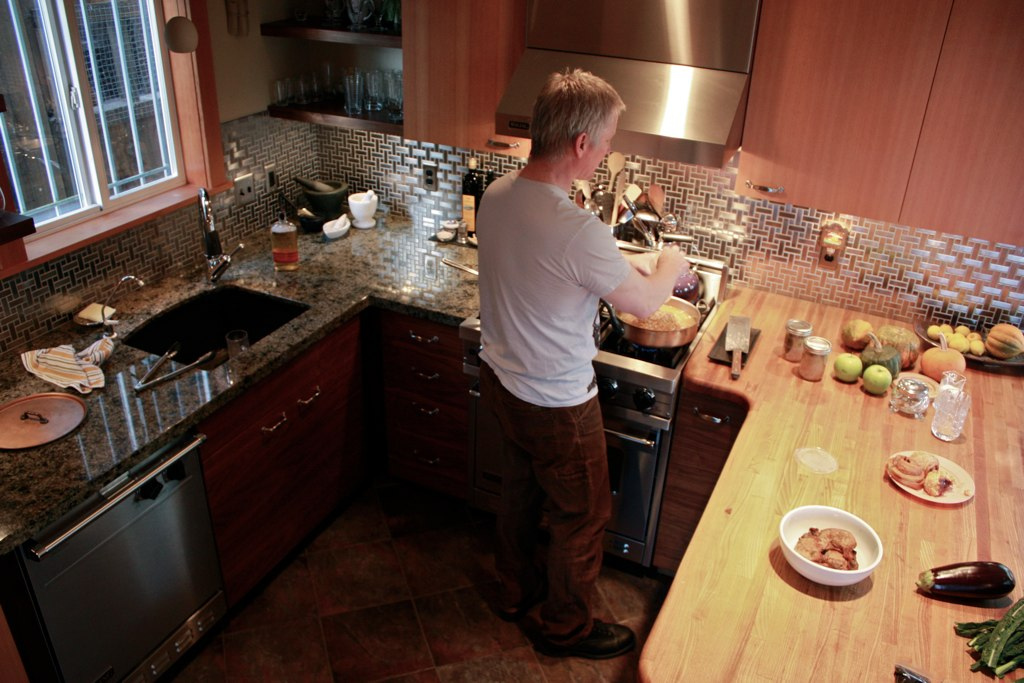 There is a story behind everything in this culinary jewell box.  Even the bar-stools, where guests can cozy up to the counter to watch and eat, are works of art from re-purposed wine barrels -- a treasure Brian and Jill brought home after from a winery weekend in Walla Walla. 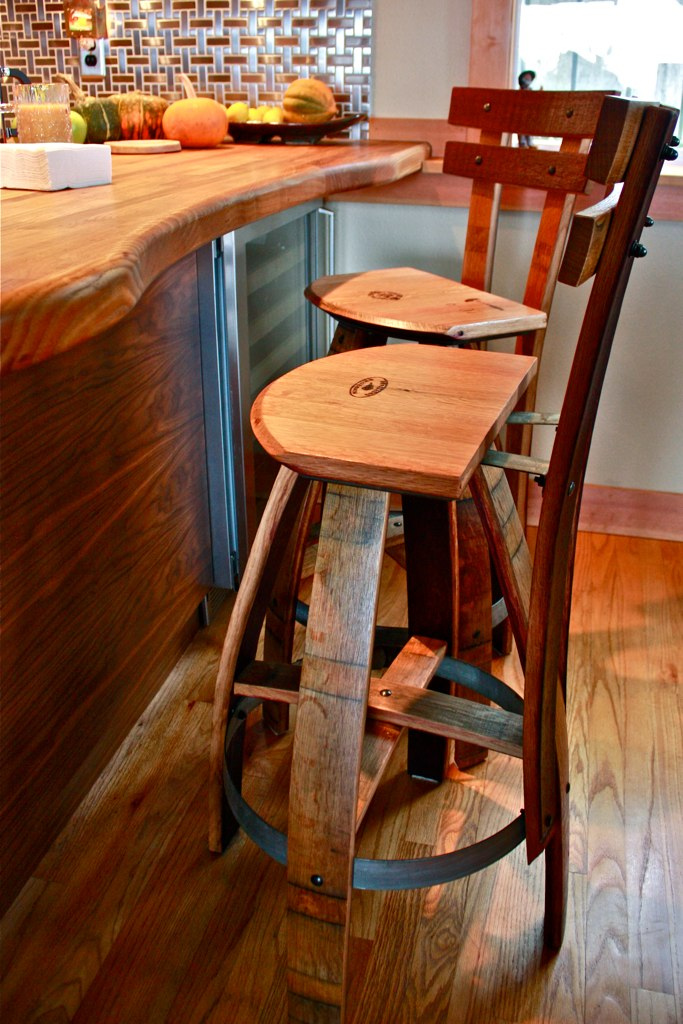 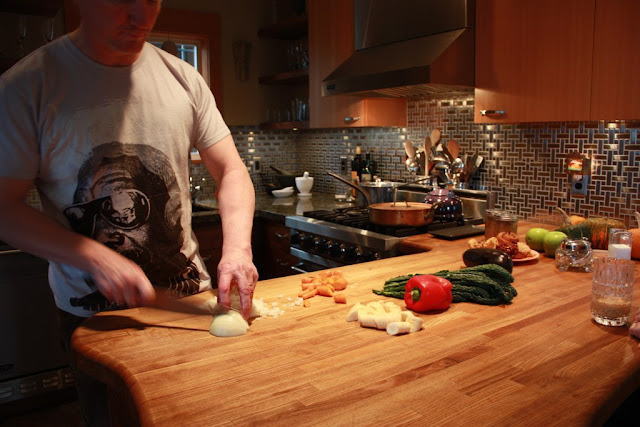 A well-oiled, gracefully curving butcher block counter separates the dining room and kitchen -- Wilke salvaged it from an old Portland bakery and refinished it to be an appealing and practical focal point. He chops away on the surface, deftly wielding his cherished Kramer knife, making short work of the buttery slab of salty Olympic Provisions bacon and turnips from a local farmer’s co-op called Wealth Underground. 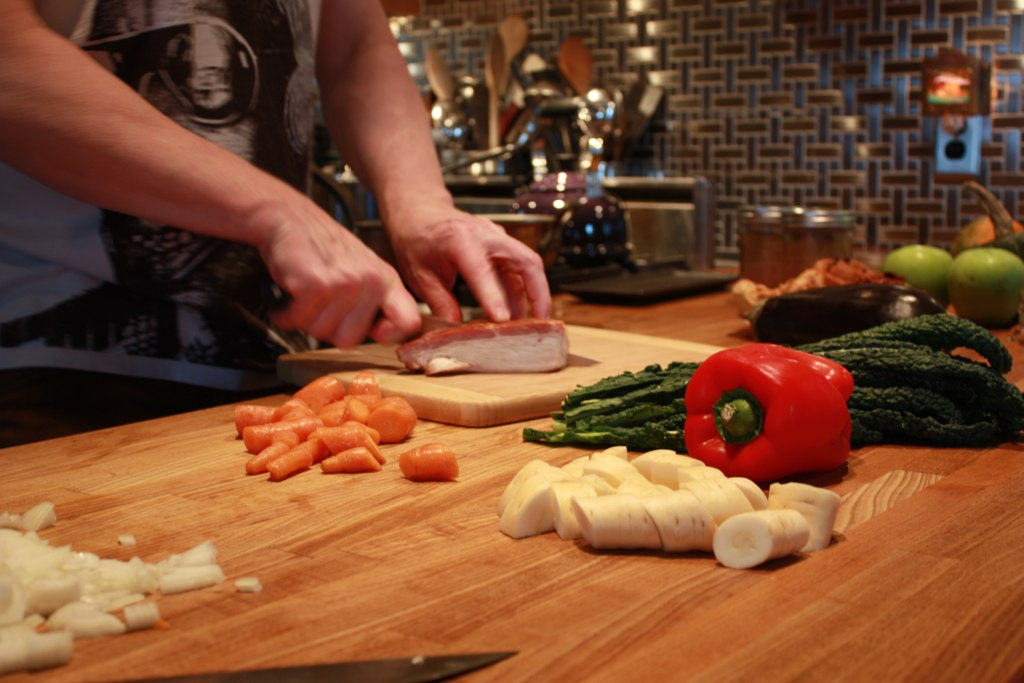 Everything in this space, from the appliances to the utensils and ingredients, are beautiful and have purpose.   Chef Wilke and Jill are practical in their approach to cooking, design and living but embrace the artistic side of their surroundings with equal love and creativity.  To the left of the stove is a collection of mortar and pestles.  Each corner  of the kitchen showcases the rare combination of utilitarian still life. 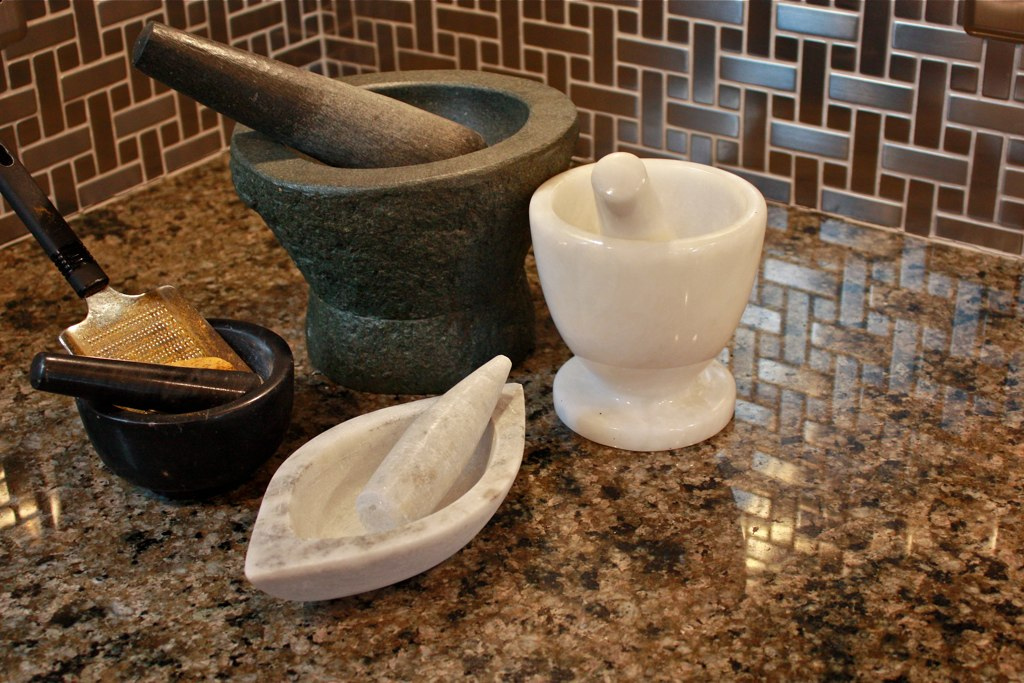 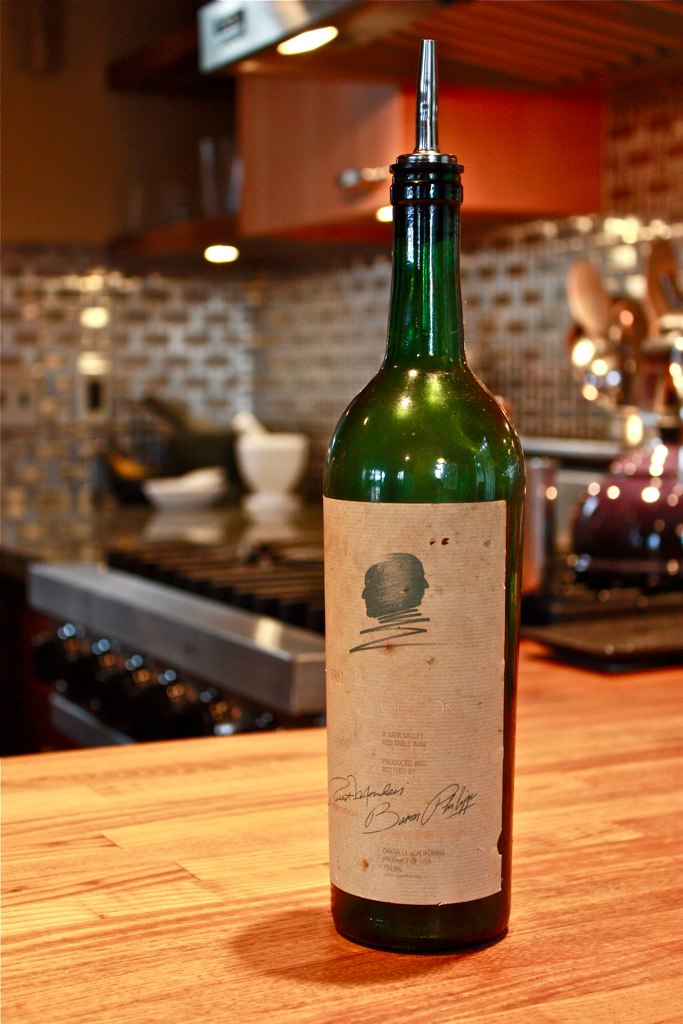 The bottle of 1981 Opus wine on display was shared with his father over 25 years ago in Chicago and is a loving reminder of that memorable meal.

I couldn't help but ask about the graphic design of a face drawn onto Chef Wilke's tee shirt.
Brian looked at me with a lopsided grin, and I knew I was in for a good story. The tee shirt portrait is a custom rendering of Blues artist Professor Longhair known as the “Bach of Rock and Roll.” Brian explained that Longhair taught himself to play using a piano that was missing several keys. Because of, rather than in spite of, his lacking instrument, he created music that was solely his own — a wild mix of New Orleans jazz and blues fused with Cuban beats. Wilke listens to Professor Longhair on vinyl record albums when he cooks at home, the music inspiring him to make incredible food from the carefully curated contents of his fridge and cupboards. His cooking philosophy is based in part on the simple idea of using quality, local, fresh ingredients to create nourishing and delicious food.

Like Professor Longhair, it's all about knowing how to make something great out of what you've got. 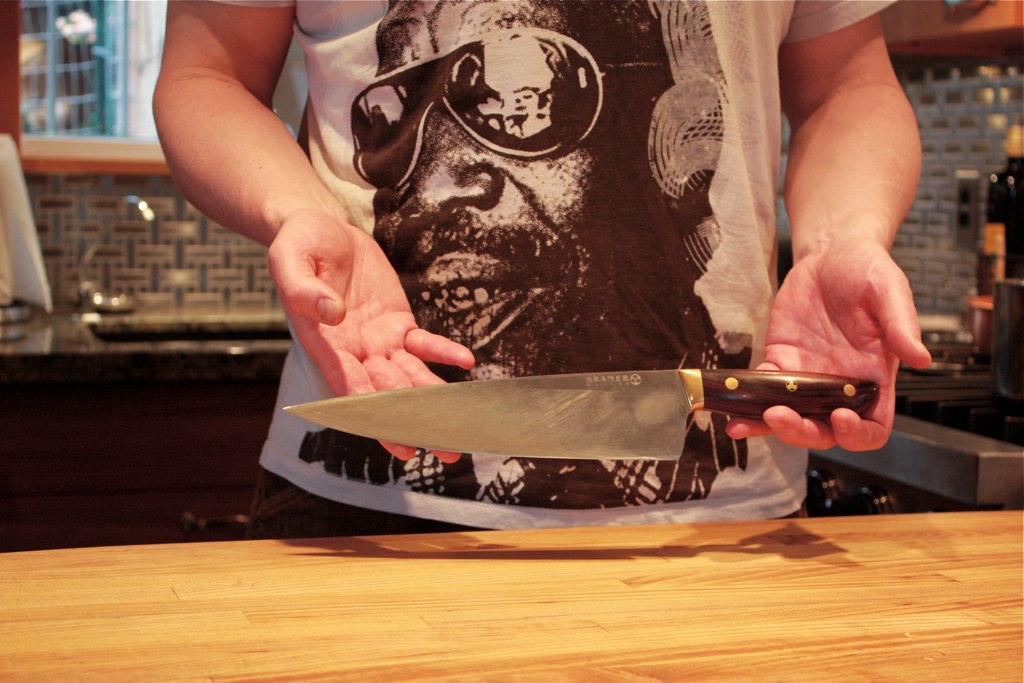 What inspires your kitchen and your cooking?
"I guess the efficiency is the most important thing. I really did design it as a professional kitchen would work so everything is accessible--the tools, the ingredients... it's really really compact and efficient for a one person kitchen." 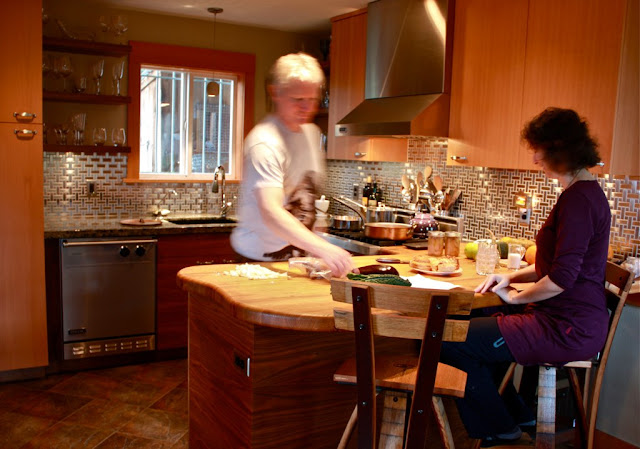 What is your favorite kitchen tool or element?
"It's gotta be my Kramer knife. The last time I checked, there was a 2 year waiting list... this guy builds knives by hand. He's a master blade-smith I bought my knife before he got famous, then he was in Cooks magazine or something like that and now his knives are coveted. I've had every knife out there and they just cut differently. This is my favorite by far."

What's the most memorable meal you've ever cooked in your kitchen?
"Bikram and his family from Nepal came over one night. Bikram is the Nepalese first term chef instructor at the school and I've known him for over 20 years. He's one of my best friends. It was rather nerve-wracking to prepare food for his father, uncle, aunt and cousin because he's such a phenomenal chef... and I thought for a long time about what I could possibly make for these people. Then, I thought, screw it man, I'm just going to make Nepalese food. I mean, what am I gonna do? Serve Italian? Either it'll be okay or I'll make a complete ass out of myself. We actually ate sitting on the floor in the living room and it was one of my favorite nights of my entire life."

The biggest challenge for cooking in your kitchen?

"The same as my favorite thing-- it's small. When you get rockin' and rollin' in there, if you have more than one person it gets pretty dicey."

How would you describe your cooking style?
"Definitely "Black Box." (Author’s note: The "Black Box" test is a final exam in culinary school where students are given a few random ingredients and expected to create a meal or course using techniques, methods, herbs, spices, and fats from the restaurant pantry). Fresh ingredients and solid technique. Food is the only thing that affects all 5 senses and when you put things together while considering all five senses, you can pull a great meal together. My mom really inspired my whole interest in cooking. She used to put out braised meat, then smaller serving dishes with all kinds of ingredients like rice, chow mien noodles, onion, pineapple, scallions, coconut, peanuts... you know, 20 different things and you could just build your own meal from there. As a kid, I learned so much about what goes together and it inspired me to experiment. It was also a really cool way to feed a large crowd. It encouraged communication between everybody and was a magical dish that carried so much imagination, conversation and inventiveness." 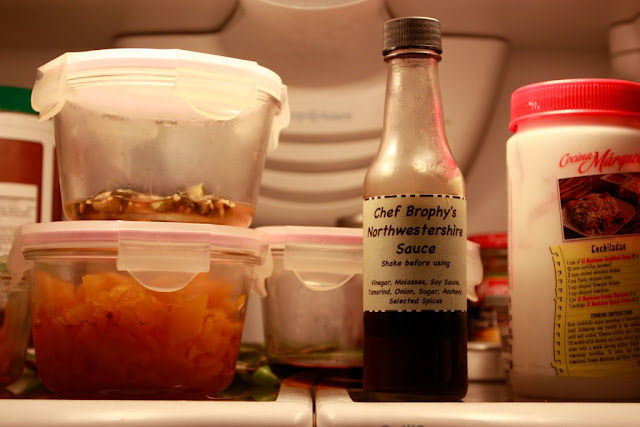 Best cooking advice or tip you every received?
"George Thompson was my culinary mentor and we still teach together today. He really taught me about the whole "taste and aroma" idea. What we call "taste" is really much more about aroma... once you understand the intricacies of how they work together, that last little attention to spices and flavor makes the difference between good food and great food. It's genius how he breaks that down." 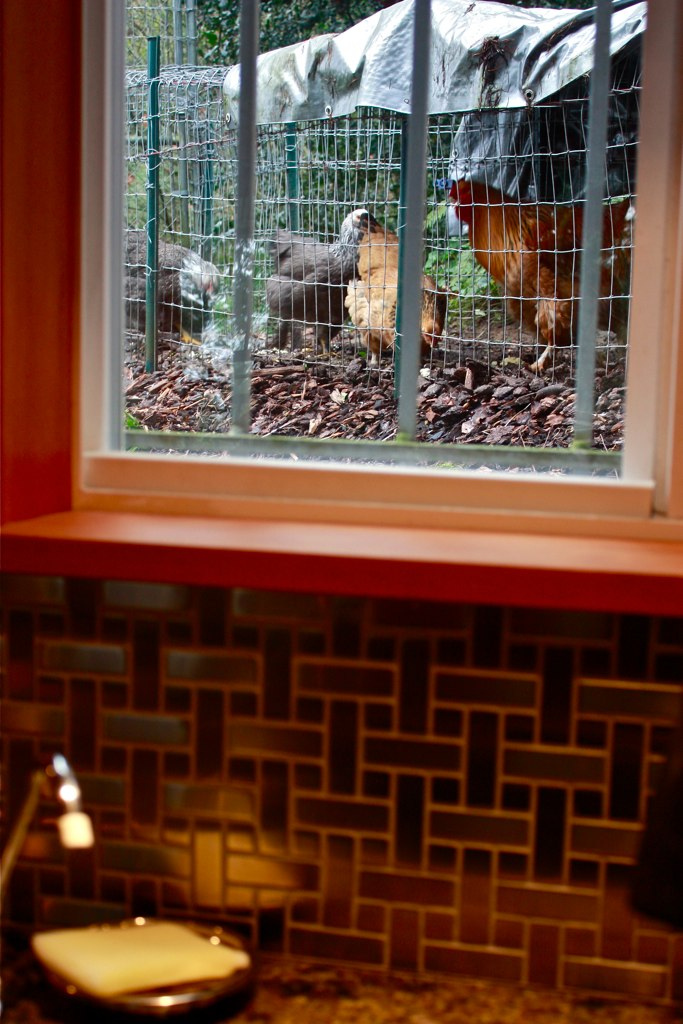 The view from Wilke's kitchen window just over the sink is of his chickens.  Practical and interesting, an egg-celent and egg-clectic addition.  Very Portland.  Very Chef-ish. 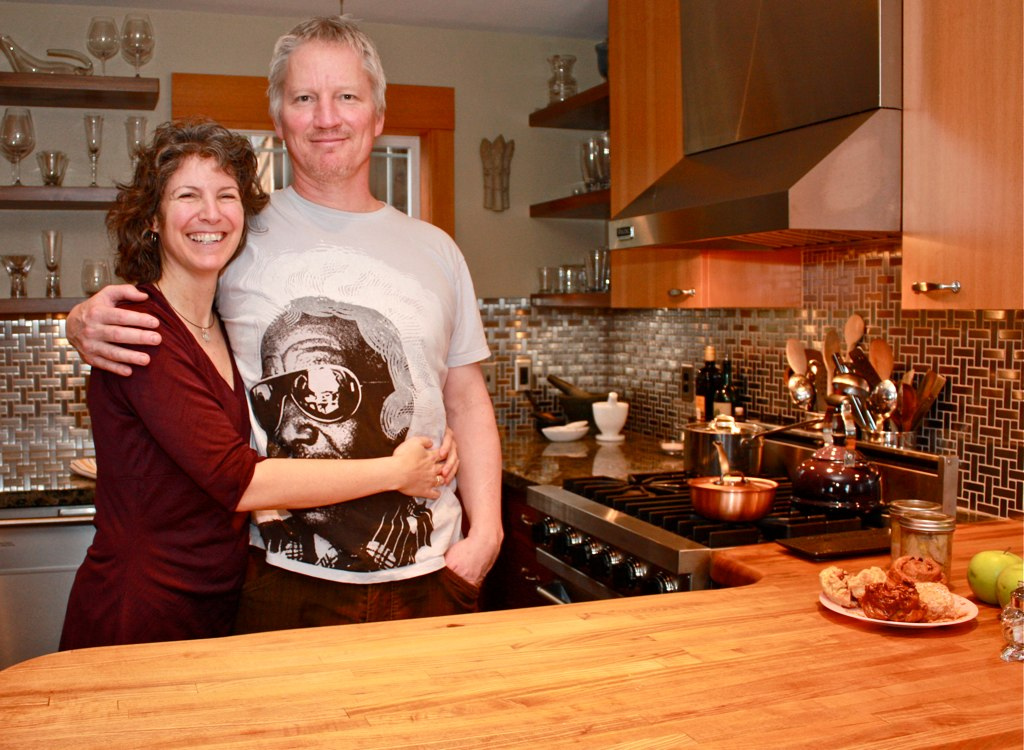 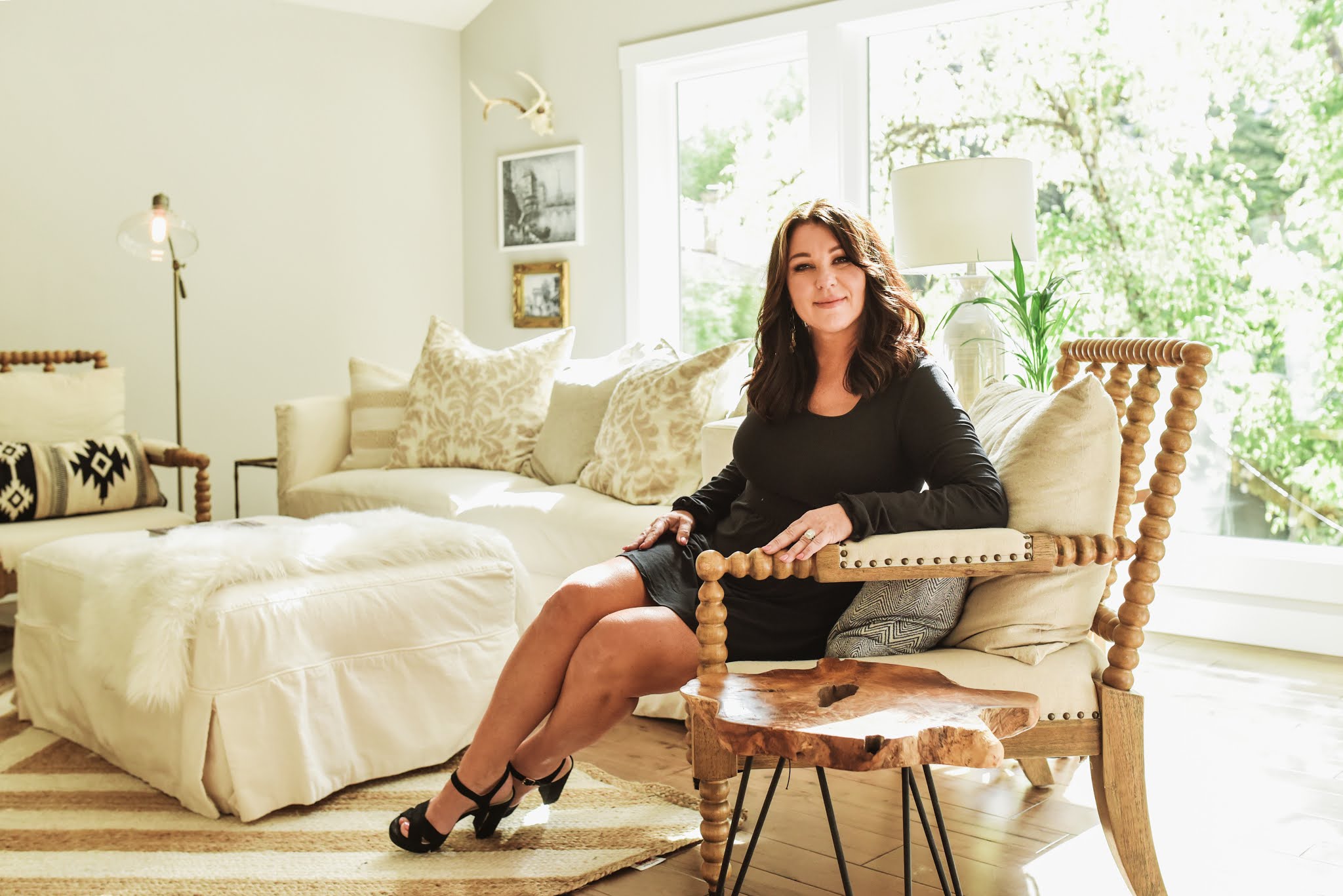